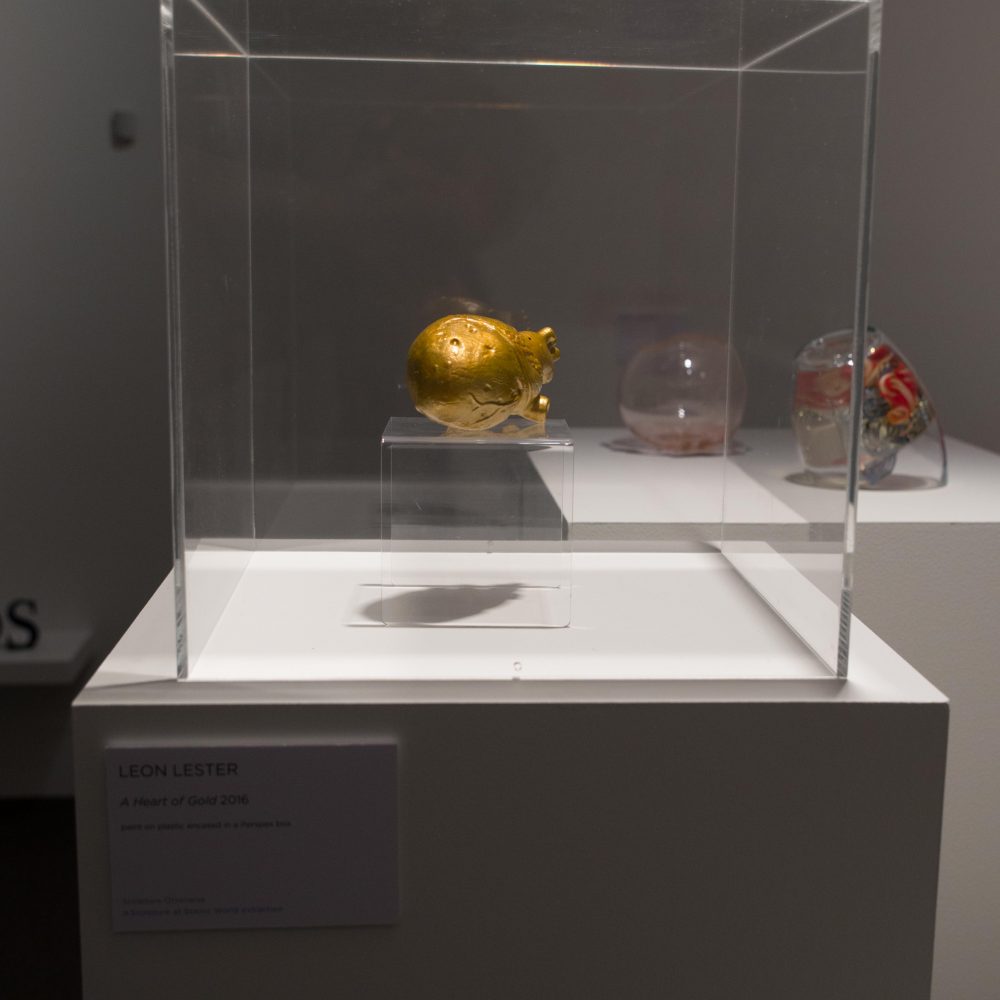 Acrylic on Plastic inside Acrylic Box

This sculpture is a replica model of the rarest thing that exists in the universe. There is no other object that is scarce as this in the entirety of all creation.

Mystically speaking, the colour Gold has long been associated with the highest vibration in the Universe. Many enlightened masters and saints have long been observed to have an aura and halo that is golden in colour. Its vibration is associated with a highly evolved state of enlightened consciousness. These auric vibrations can now be captured by Kirlian photography which is a collection of photographic techniques used to capture the phenomenon of electrical coronal discharges. The photography captures the colours that represent the life force or energy field that reflects the physical and emotional states of their living subjects and corresponds to the human aura.
Henceforth, a heart radiating at a vibration that is observed on the subtle energy spectrum as Gold suggests it has entered into one of the highest vibrational states possible in the universe, one that is found only rarely in all of creation.

Colour, while long been known to be symbolic of human vibration and health, has long been known to influence them as documented in the fields of phototherapy and chromotherapy. According to recent studies completed at the Massachusetts Institute of Technology, it has been shown that individual colors influence respiration rates, blood pressure, along with biorhythms and brain activity. Due to these findings, color is used as a treatment for a wide-range of illness and disease.

The power of the human heart is unquestionable and is now regarded by science as the most influential part of the body. The heart generates the body’s strongest and most extensive rhythmic electromagnetic field. Compared to the electromagnetic field produced by the brain, the electrical component of the heart’s field is about 60 times greater in amplitude, and permeates every cell in the body. The magnetic component is approximately 5000 times stronger than the brain’s magnetic field and can be detected several feet away from the body with sensitive magnetometers.

Basic research at the Institute of HeartMath shows that information pertaining to a person’s emotional state is also communicated throughout the body via the heart’s electromagnetic field. The rhythmic beating patterns of the heart change widely as we experience different emotions. Negative emotions, such as anger or frustration, are associated with an erratic and disordered pattern in the heart’s rhythms. In contrast, positive emotions, such as love or appreciation, are associated with a smooth, ordered, coherent pattern in the heart’s rhythmic activity. In turn, these changes in the heart’s beating patterns create corresponding changes in the structure of the electromagnetic field radiated by the heart, measurable by a technique called spectral analysis.

These experiments on the heart’s field also found that it is directly involved in intuitive perception, through its coupling to an energetic information field outside the bounds of space and time. Using a rigorous experimental design, HeartMath found compelling evidence that both the heart and brain receive and respond to information about a future event before the event actually happens. Even more surprising was their finding that the heart appears to receive this “intuitive” information before the brain. This suggests that the heart’s field is linked to a more subtle energetic field that contains information on objects and events non localised in space or ahead of time.